The award was established in 2015 as part of National Rural Health Day to shine a light on those who serve the vital health needs of the estimated 57 million people living in rural America.   Only one individual per state was selected to receive this honor.

“Rural hospitals are the backbone of the healthcare industry,” noted Powell, “and critical to the health and economic wellbeing of the communities they serve.”

“Serving as the administrator of any rural hospital, including Collingsworth General, is extremely challenging,” she explained, “but I can’t imagine any other place I would rather be.”

Powell was born and raised in Collingsworth County and has worked in the healthcare industry her entire career, including stints at Northwest Texas Hospital, Amarillo, Texas, Great Plains Regional Medical Center, Elk City, Oklahoma, and Harmon Memorial Hospital, Hollis, Oklahoma.  She returned home to Collingsworth County in 1993 to work as the assistant administrator of the hospital in Wellington.
Powell was named administrator of CGH in 2004, by Preferred Hospital Leasing, Inc., the Shawnee, Oklahoma-based operator of CGH, and has continued to serve in this capacity for the last 15 years.

“I can’t think of anyone more deserving of this award than Candy,” said Andy Freeman, president and CEO of Preferred.  “Candy has worked at the hospital for 29 years and always has the best interest of her community and her patients at heart.”

Nominations for the award can be made by the State Offices of Rural Health, industry organizations, hospitals, clinics, and health systems.  Powell was nominated by Cindy Ellis with the Texas Primary Care Office.

Each year, NOSORH compiles an eBook featuring the stories of award winners “who are making a tremendous and positive impact on their communities in several vital health-related areas.   The book is now available to read free-of-charge at https://www.powerofrural.org/community-stars/; Powell can be found on page 44. 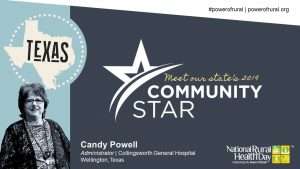 Candy Powell, administrator of Collingsworth General, was recently named the 2019 Texas Community Star for her ongoing contributions to healthcare in a rural community